My daughter and I are among an elite group that make up about 10% of the world’s population.  We apparently should be better at sports, have higher IQ’s, be more creative and artistic and marvellous at multi-tasking.  Now, it could be said that this is because we are female but actually it’s because we are both left-handed and as luck would have it, it’s international left handed day on the 13 August  this year.  Now quite how we are going to celebrate this and indeed be celebrated ourselves remains to be seen but at least its a thing right?   Research would suggest that being left handed also means we are more accident prone, have a tendency towards dyslexia and can’t be trusted as we can shake an enemy’s right hand while holding a sword behind our backs with our left.  Always a useful skill I’ve found.

Antagonism against left-handers has been going on for centuries.  Even the Bible contains many inauspicious references to the left hand, including seating the great and the good on the right hand of the Lord and sending the goats to the left.  Charming.  In the development of language the translation of the word “Left” has been less than flattering.  In Latin, from which many modern languages originate from, left is translated as sinister.  This, in modern English, is taken to mean evil.  In French we fare no better as the word for left is gauche, which means awkward.  And yes I concede I can look particularly gauche and awkward struggling with a scissors or a can opener as my giggling children never fail to point out to me.  Even in our own native language we are referred to as ciotóg, which can also be translated as the strange one.

I have watched with interest over the years how some parents of left-handers try to make their children’s life easier.  They insist on getting special pens, rulers and various other equipment in order to help them perform better in school.  They even string their guitars backwards so they can play left-handed.  Undoubtedly there are situations where this is necessary but in general the beauty of being a left-hander is in our ability to adapt to our surroundings.  There is no question but that we live in a right handed world.  The majority of gadgets are geared to favour the right hand and that’s probably why we are labelled accident prone.  Try using a power tool with your opposite hand and see how far you get.  That’s my excuse for avoiding the circular saws and drills lying around the house.  Honestly.

I know many people of the left handed persuasion who have taught themselves to do  things with their right hands but I am not one of them.  I am completely and totally left-handed and my right arm is just something to put my watch on.  However, I totally embrace my difference and I encourage my daughter to do likewise.  I have never owned a left-handed pen or a ruler or even a scissors, nor will I ever get one for her. There is no reason to single her out and bring attention to her left-handedness any more than is necessary as she will come up against it every day of her life.  The reason we are so good at being creative and thinking differently is because every day we have to adapt and approach even the most mundane tasks with a unique slant. 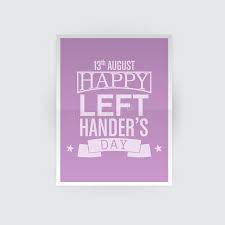 Being a left-handed mother to a left-handed child is a great thing.  I can teach her to embrace it and enjoy it but I still can’t help her to cut in a straight line with a normal scissors.  However, being a left-handed mother to a right-handed child is not as straightforward.   I couldn’t teach the other two to tie their laces for instance.  I would put them facing me and try to encourage them to mirror what I was doing but it wasn’t a howling success.  God bless Velcro that’s what I say.

The good news about being part of this exclusive club is that we have a special ability to write upside down and backwards, and we will also excel when Hebrew and Arabic take over the world as they write from right to left which suits us perfectly.  Until that day comes, I’ll struggle on with the power tools, the scissors and the pens, but there are days when I would cheerfully sell one of the children for a left-handed tin opener.