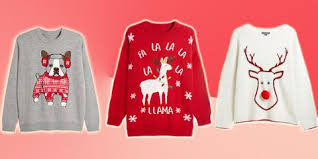 Once upon a time, the only place you would cast your eyes upon a Christmas jumper was on the host of the Late Late Toy Show.  It was part of the whole extravaganza, part of the surprise and a sign that Christmas fever was upon us once more.  Now however, the offending items are for sale in every shop you enter.  Pop in for a litre of milk and pick up a bright and colourful snug festive jumper.  Go to pick up some new baubles and give in to your secret woollen wishes while you’re at it.  There mustn’t be a sheep left in the world with his woolly coat still on. Poor things will freeze.

Much to my children’s chagrin I’m positively allergic to all things woolly.  They itch, they shrink in the wash, they add layers of bulk, need I go on?   I mean it’s taken me this long to be become comfortable with myself as I am.  Why on earth would I wish to transform myself into an elf or a reindeer or any of Santa’s other little helpers cleverly disguised as wool creations?  I confess I’m slow to embrace the whole Christmas jumper phenomenon.  Mind you, in saying that I always admire them on other people.  I have a good giggle as the great and the good parade up and down throughout December draped in various designs of a Christmas variety.  It seems anything goes at this time of year now, the brighter the more ridiculous the better.

Naturally enough my children have the misfortune to be the only ones in the entire world to be without so much as a pair of Christmas socks.  Everybody, and by that I mean absolutely everybody they’ve ever known ever, of course has a Christmas jumper.  Why oh why don’t they?  Well I thought they were exaggerating about them being left out of something huge and fantastic until I discovered that there was a world record set in our capital city  for the most people in one place wearing Christmas jumpers.  Ok maybe I am really out of the loop here.  Apparently over twelve hundred people gathered in Dublin’s main thoroughfare very well turned out in woolly versions of snowflakes, snowmen, reindeer and decorations of all sorts.  Sports stars, television stars, politicians and all sorts of movers and shakers strutted their Christmas style without a care in the world.   What’s more, they did it on camera too. And, to be fair, they’ve more to lose than I do, so maybe I need to adjust my thinking about this whole Christmas jumper thing.

There is absolutely no doubt in my mind that Christmas jumpers are sartorially suspect.   They definitely sit on the cheesy side of the spectrum.  However, Christmas can be a stressful time.  It can be fraught with anxiety about the financial drain of present giving and the copious amounts of forced family interaction.  And then there are all those rotten Brussels sprouts that we are trying to force down our necks with a litre of gravy.  I mean, it just adds to the pressure we feel around this time.  So what better way to de-stress than to throw on an obnoxious jumper and have a good old laugh at each other?  If nothing else they are practical and cosy in the chilly winter weather and you can’t deny the warm fuzzy feelings they conjure up.

So it may constitute a fashion faux pas but when we’re with family surely that shouldn’t matter.  Maybe Christmas isn’t really a fashionable affair after all.  It involves far too much eating and drinking and feeble attempts to be merry to really worry about being sartorially charming as well.  “Oh what a chic Christmas jumper” said no one, ever.  So just take it for what it is, a bit of light relief amidst the stress of all this happiness and good cheer and embrace the novelty knit.   And if a plain design just isn’t providing enough Christmas cheer for you well there are now jumpers that light up, jumpers that play Christmas music and jumpers that could actually pass for real decorated Christmas trees.  So c’mon people there’s just no excuse any more.  If I can do it, you can do it..